If you are ever in the company of a drainage contractor when he lifts a manhole cover and sees the jet black matt coating of a pitch fibre channel pipe staring up at him, you will see the corner of his mouth lift gently into a wry smile and a little twinkle will appear in his eye. Nothing but nothing quickens the pulse of a drain man like pitch fibre, apart from perhaps a 40ft weeping willow sat adjacent to a manhole cover. Pitch Fibre is a terrible product that is often found in schools, hospitals, housing estates and for some reason holiday parks from the era. 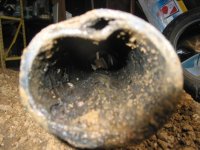 Used widely in the United States from as far back as the 1890`s as a duct or conduit (apparently the empire state  building has miles of the stuff) and also manufactured in Canada it was introduced to the UK in the 1940`s as a      lighter and cheaper option to vitrified clay. Manufactured in lengths of 8ft with push fit joints (no sealing rings) it  offered a quick and easy installation with no need for the sand and cement haunching of joints associated with    clay pipe work, bedded on sand it was thought to be a modern flexible drainage system.

Unfortunately what we were actually installing was a pitch impregnated papier mache tube, which is now thought to have a design life of 40 years so stand by your beds the clock is ticking, and just when you thought there could not be a worse product beneath our schools, hospitals and housing estates therewww.draindomain.com_blistered pitch fibre pipes was at least one UK manufacturer who had the foresight to strengthen their pipe work using of all things asbestos fibre.

It collapses and becomes misshaped when under any kind of external pressure and as usual there was little specification for pipe bedding when it was installed so it relies on the sub-soil for external support, it blisters and de-laminates internally when it comes into prolonged contact with water, and when surveyed you often see sharp edges from bricks and masonry protruding through the pipe walls. The push fit collars within the system offer no resistance to tree root ingress.

When we survey these systems we often find that the joints are particularly misshaped with the sections between the joints being slightly more uniform in shape but dipped. This affect is due to the bricks offering a more solid support beneath the pipe work than the recommended sand, soil etc on the middle sections of pipe work.

For this reason it is vital that you have as much of the system surveyed as possible before deciding which repair method is best suited to a particular system, if the system is deformed and blistered but it is without any dipped sections then re-rounding is the way forward. However if the survey shows the pipe work to be up and down between joints re rounding will restore the original shape of the pipe work but it may not necessarily fully restore fall, in cases like these i would tend to lean towards a pipe bursting repair and though it pains me to say it in some cases excavation works.

As you would expect these systems are prone to blocking occasionally and the act of clearing a system whether that be by rodding, mechanical rodding or high pressure water jetting can accelerate the deterioration of the system by stripping the blistered internal layers of the pipe wall. As the layers are removed the questionable structural integrity of the pipe is reduced even further.
Repairing Pitch Fibre Pipe Work deformed pitch fibre pipe_www.draindomain.com

We now have several repair methods available when pitch fibre systems fail, which method should be used can only be determined after the system has been surveyed and assessed.

If the main defects are internal blistering and de lamination with no major loss of shape then the system can be re-rounded and relined using a Cipp lining method. However if there has been major deformation to the system then pipe bursting may prove to be a better option for renewal and of course there is always the traditional excavation method.

Each method has its own merits and more often than not excavation works will be required to some degree usually where junctions enter onto systems, as always a detailed CCTV Survey should be undertaken so that the best method or repair is utilised.
Are You Insured For Defective Pitch Fibre Pipe Work ?

This is a topic we are frequently contacted over as insurance companies tend to knock back a claim once they discover that the defective drain is constructed from pitch fibre. However the ombudsman has made a couple of rulings that would seem to favour the insured in such cases.

The argument from the insurer`s is that pitch fibre is a poor product with a limited life span that starts to deteriorate from the minute it is installed below ground even when installed to the manufacturers recommendations, the ombudsman however feel that there is a certain amount of good faith involved as the insurer`s are happy to take your premium each month on the basis that you have a system constructed from a suitable material. The fact that pitch fibre has been used only comes to light when a problem occur`s and this is usually the first that the home owner knows about it.

In the ideal world when you change you policy the insurer`s should enquire if you have a pitch fibre system and of course 99% of home owners would not have a clue, so you would have a situation where a drain inspection is required to find out what the system is constructed from which of course is never going to happen.

The ombudsman would therefore seem to suggest that unless the insurer`s take steps initially in the wording of your policy to state that you are not   covered for pitch fibre pipe work that they should pay for the repairs, such policy`s do exist but only rarely at the moment.

This is still a gray area and i have given up trying to second guess the initial response from insurance companies on this subject, only recently we      were contacted by a guy who was told that yes he was covered on his policy but as the system was only 15% deformed they would not fund the  repairs. This raises many questions such as who measured the deformity, how did they measure it and surely you are either covered for a defect or  you are not, the percentage of the defect is only relative to how urgent the repair is.

I suspect the above was just the latest twist on the policy wording as the insurer`s as with the banks are hanging on to our money for as long as they can in the current economic climate, i advised the guy to go back to them and get a full explanation in writing and then to go through the companies complaints procedure and ultimately if required he should go to the ombudsman.

Quite often the fact that you are persistent and query the insurer`s initial response can be enough to get the initial decision reversed, if you just walk away and accept it they have done their job and saved money so i would always recommend that you carefully read your policy and make sure you get all correspondence in writing.

This entry was posted Wednesday, 13 October, 2010 at 3:54 pm
You can follow any responses to this entry via RSS.
Both comments and trackbacks are currently closed.